You may have heard your nerdier friends (such as myself) talk about it, beg for invites to it, ask if anyone else has it yet… some cool new thing called Google Wave. Sometimes it is written with slashes as \/\/ave (cool eh?).

So what is Wave?

Basically it is being touted as a modern replacement for the nearly ancient technology of email.   Great, but what does that mean?  Before Wave can be explained you have to understand why wave is being created and why we need a replacement for email.

The Problem with Email

Email has some inherent problems…

As a one way communication tool it works fairly well, but even then it is slow… so Instant Message has taken hold as a useful technology.  Email truly falls short when used as a collaboration tool with groups, mainly because its easy to accidentally leave someone out in a group email, and many people still don’t understand when (or when not) to use the reply or reply-to-all options.  There is just too much room for error, there is also no administrative control for the originator.  Another issue with email is that it is just text… there is a lack of extensions, plugins, etc.  (Think Facebook).  So about the issue of group emails and leaving someone out.  If you leave someone out and then several email replies later they may realize they need to email Fred.  Fred gets some obscure email that has some pieces of the conversation below the current message, is confused, and then someone that was paying good attention, that hopefully saw all replies, will need to fill Fred in.

So some wizards at Google sat down and asked the question, “What would email be like if it were created today?”  So they imagined a system that is a mixture of email, instant message, Google Docs, website forum/comments, has plugin and extension capability, has threaded messages, and has complete playback capability.  So if Fred were left out of an email it is a mess, but if he were left out of a Wave he could be added in, he could then play it back from the beginning, like a movie, to see the conversation unfold, he could then reply to a single piece of the communication, he could edit someone else’s words, he could even add in a poll to have the group vote on a decision, or include files or pics.

As for now Email and Wave are not friendly towards each other.  They are as different as the Web and Email – totally different tools, with different protocols.

It took email quite a while to catch on, but someday we may all be emailing, texting, calling, skyping, voiping, and waving.  Will email be kicked to the curb for the new sexy Wave?  It is hard to imagine it going away entirely, but expect to hear the question “Do you have Wave?” more and more frequently.

My Opinion of Wave So Far

So far Google Wave is a tiny bit confusing and feels like a ghost town, at times it is buggy and slow, but there is nothing quite as cool as doing realtime waving with someone and seeing them type (yes you see them type in real-time, if they are in the wave with you).  You can view public waves by searching for this in Google Wave: with:public

Even then, the novelty wears off quickly since few of the people I know have access to wave, so it is really not very useful right now for me.

Right now it is mostly composed of the nerdiest in society, and it is very male dominated.  I searched for all public postings with bodybuilding and there were none, which is very telling considering there are significantly more male wavers and there are tons of public waves about many other topics including various software.  So I made one… why not? 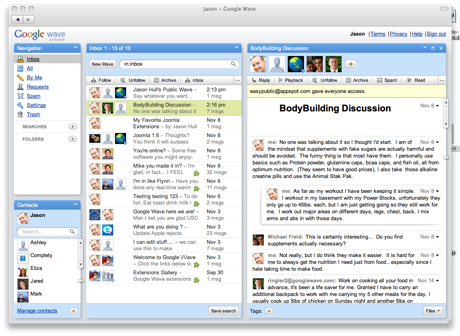 How to get Wave

You can request an invite from Google here, but your best bet is to ask your nerdiest friends for invites or to search twitter for “Google Wave Invites” and ask those saying they have invites available for an invite.  That is how I got mine…and no I do not have any invites, unfortunately.

Feeling nerdy? Want to wave me?  hullbody@googlewave.com is my wave address.

Questions? Did I miss something?  What’s your take on Wave so far?  Let me know in the comments!