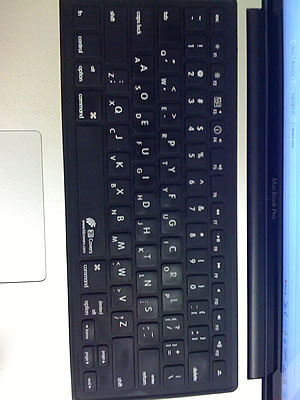 My silicone Dvorak keyboard cover protects my computer and my wrists!

Allow me to reveal my true nerdy-awesome nature… part of being great, at least for me, is being nerdy.

What is Qwerty?  So look down at your keyboard… find Q and the keys following it.  QWERTY is the name of that layout of keys.  Originally keys were alphabetical, but they were rearranged into a layout that was designed to be difficult and slow down the typists and now you use it everyday and if you type a lot it is hurting your wrists.

I was annoyed by the issues with typing and the “carpal tunnel” or rather, the stupid pain from lame typing.   So I did some research and found that Dvorak is an alternative layout that you can type in that has been found to reduce movement 50%!

It took me about a month to get used to Dvorak and now I love it.  I found a cool silicone cover from KB Covers for my Macbook Pro keyboard that rearranges the keys and protects my computer and I just changed the keyboard layout to Dvorak (it is built into all major operating systems).  This is good, because my last Macbook Pro I actually popped all the keys off and rearranged them into Dvorak… quite scary.  I’m not sure if this can be done or not on my solid body Macbook Pro… if so I would probably do it, because the downside to silicone keys is my fingertips get gripped by the keys.

So once you have your keyboard cover or keys switched, the computer needs to have its keyboard input setting changed.  On a Mac it is easy (as with most things): System preferences -> Language & Text -> Input Sources -> Dvorak. 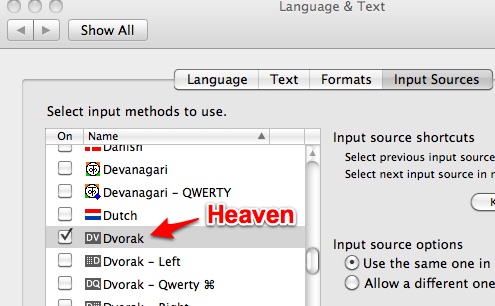 I have Dvorak and U.S. (Qwerty) selectable from my Menu Bar

Overall switching to Dvorak has made typing just feel easier and it does not mess me up when I have to use Qwerty in hunt-and-peck-mode on my iPhone.

Ready to get nerdy?  Wrists, forearms hurt from typing?  Switch, give it a month, and be sure to let me know how it worked out for you in the comments!